What’s up Fellas?!
I have always believed that travel teaches you without a scorecard. It enriches you gently. You already have a little reminiscence of my travel experience in Dubai , but now let’s do some food talk. The best part, Isn’t it?

A sprawling city with unparalleled multicultural cuisine. Dubai doesn’t have a “national cuisine” but is much influenced by the Indian cuisine because of the larger Indian and Pakistani population. There are a Lot of food options to explore but what you shouldn’t miss is trying the Lebanese food there. Listing a very few things you wouldn’t want to skip.

These are the signature things you cannot miss on. Dubai is a non-vegetarian’s paradise. Shawarma, an Arab snack is definitely a must-try and is served at every restaurant and even at wayside eateries. Pita bread filled with the meat of your choice (lamb, chicken, beef, turkey) makes a shawarma. Served with pickle,Hummus or Tahini.
Falafel is made by deep frying chickpeas and/or fava beans and is traditionally served in pita bread.

It makes a frequent appearance on most Middle Eastern tables and I relished a lot of it in Dubai. ☺️
It is simple and delicious; bursting with flavours from fresh herbs and a zesty lime vinaigrette. Fattoush derives its name from “fatta.” Fatta dishes in the Middle East are dishes that use second-day pita bread.

A paradise for dessert lovers like me, I’m sure you wouldn’t want to miss on trying the best cheesecakes ever.
In the picture is the Toasted marshmallow s’mores galore cheesecake. Their Oreo cheesecake and Red velvet are the favourite picks.

Even though cold stone ice creams are easily available here in Delhi now, but the quality of the ice cream and the toppings offered are quite different. I totally loved the berry flavoured and coffee flavoured ice cream. One cup of ice cream is Priced at AED 18 with 3 toppings of your choice.

Noooo this isn’t a simple cheese Margherita!
It’s a Manakeesh which is basically a Middle Eastern Flatbread with Cheese & Zataar.
Zaatar is a spice combo involving dried thyme, sesame seeds, salt, and the middle eastern spice, sumac. You’ll easily find it at any of the Lebanese restaurants.

I hope this helps a little. Maybe your taste buds would like to thank me later on!
I’l get back to you with a more detailed post soon. 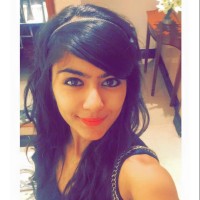 There Is No Better Friend Than A Sister !!